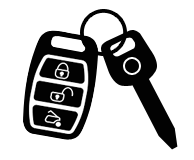 Is there any kind of age restriction?

Only people over 21 years of age and who have a driver's license for a minimum of 2 years can rent cars in Cuba through our website.

What documents do I have to present when picking up the car in Cuba?

You must present your valid driver's license with at least 2 years old, original passport or identity card in case you reside in Cuba and the voucher of your reservation in print.

How can I made the payment?

The payment is made online, once the confirmation number has been confirmed and sent, an email will be sent with a payment link. The link will show the prices in EUR at the rate of the day with the Cost in USD. You will pay in USD the agreed value. All these reasons are for the embargo on Cuba.

How can I add an additional driver to my reservation?

Is car insurance included in the price?

It depends on the offer you select. During the car rental process you can see if the car insurance is included or not in the total. In case it is not included you must pay it at the time of picking up the car in Cuba.

Is there any other cost when picking up the car?

Yes, you must pay an amount for the fuel, the price varies depending on the car. Also a security deposit that insures it in case you incur damages to the car that are not covered by the insurance that will be returned at the time of delivery the car. If car insurance is not included you must also pay it.

How do I change my booking?

What happens if I have an accident or breakage?

In case of breakage, accident or other similar mishap, the customer must immediately inform the sales office belonging to the RENTADORA closest to the place, as well as take safety measures avoiding damage, accidents or theft. The customer is responsible for the car while in custody through this contract.

Can you drop off the car to a place other than the collection?

Yes, but you will incur an additional cost, the cost varies according to the place of delivery, please consult with the rental agency in Cuba for more information.

What happens if I return my car after the maximum time?

The customer has 59 minutes of bonus, after that time and up to 5 hours will pay 1/5 of the daily rate for each extra hour. 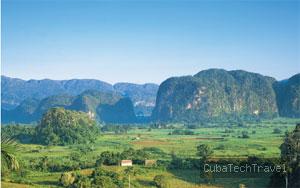 Western Cuba, a favorite destination for visitors interested in nature tourism, has the Viñales Valley, whose origin dates back to more than 300 million years ago, as an attraction par excellence to enjoy that tourist modality. According to experts, the Viñales Valley is an exceptional scenery, in which its unique nature and the preservation of the environment blend with the agricultural work of men and women, especially in tobacco fields.

Covering an area of 132 square kilometers, the Viñales Valley is also the most outstanding exponent of a chalky valley in the Antilles, and is surrounded by "mogotes", which are hills with round tops and vertical slopes. According to experts, the valley's flora is closely linked to its ancient past, since it holds 17 endemic varieties that cannot be found anywhere on Earth, including the cork palm (Microcycas calocoma), which is considered a living fossil from the Jurassic period.,

The region's fauna is highly endemic, including birds like the bee hummingbirds (Calypte helenae), Cuban trogons or "tocororos" (Priotelus temnurus), cartacubas (Todus multicolor), nightingales (Myadestes elisabeth) and Cuban grassquits (Tiaris canora).The town of Viñales, in the heart of the valley, is a typical agricultural settlement whose main street is flanked by galleries of columns and red-tiled houses. The socio-historical development of the region contains elements and sites that characterize the Cuban people with antecedents from aborigines, African slaves and peasants. The unique features of the area's natural landscape surround all this.In one of the "mogotes", known as "Dos Hermanas" (Two Sisters), visitors can enjoy one of the world's biggest outdoors natural paintings, the so-called Mural of Prehistory. ,

The Mural of Prehistory, which is 120 meters high and 180 meters wide, was painted on the slope of the aforementioned hill. It is a singular representation of the biological evolution of Sierra de los Organos, also in western Pinar del Río province.Experts recall that in order to paint the mural, the vegetal layer on the slope of Dos Hermanas had to be removed, while a score of local residents participated in the dangerous artistic work under the guidance of Cuban Professor Leovigildo González (deceased).

The passage of time has failed to erase this breathtaking work of art, which attracts thousands of visitors every year, who come to enjoy the images of the plesiosaurus and the megalonus rodens, painted with singular ability on the hill's slope.
In addition, the Viñales Valley has numerous caverns, among which Cueva del Indio (crossed by the San Vicente River), Cueva de San Miguel and Cueva de Santo Tomás stand out. The latter has been classified among the largest caverns in Latin America, with more than 45 kilometers of galleries.,

The Viñales Valley, which was declared World Heritage by the United Nations Educational, Scientific and Cultural Organization (UNESCO), is also Cuba's true Natural Monument and receives thousands of vacationers who want to be in direct contact with nature while they tour the Cuban archipelago.A large number of hotels in Pinar del Río province are in the Viñales Valley, where Los Jazmínes Hotel offers a wide range of options, including trails for ecotourism.Those trails are "The Road to the Mogotes", which begins at the hotel and leads to the depths of the valley, ending at the Mural of Prehistory; "Unsuspected Nature", in which travelers can enjoy the many species of birds inhabiting the region, and "The Secrets of the Underground World", in which Cueva de Santo Tomás stands out for its great archeological values.

The hotel's amenities include air-conditioned rooms, sports facilities and outdoors activities.Another hotel is La Ermita, which offers the ecological tour "Wonders of Viñales", which consists of a walk to Sierra del Infierno to watch the local flora and fauna, especially birds, and take a close look of the cork palm.The hotel infrastructure of the Viñales Valley is complemented by the Rancho San Vicente Hotel, which is located near a spring of mineral-medicinal waters that became famous in the 19th century.